I am a Black Immigrant in the USA 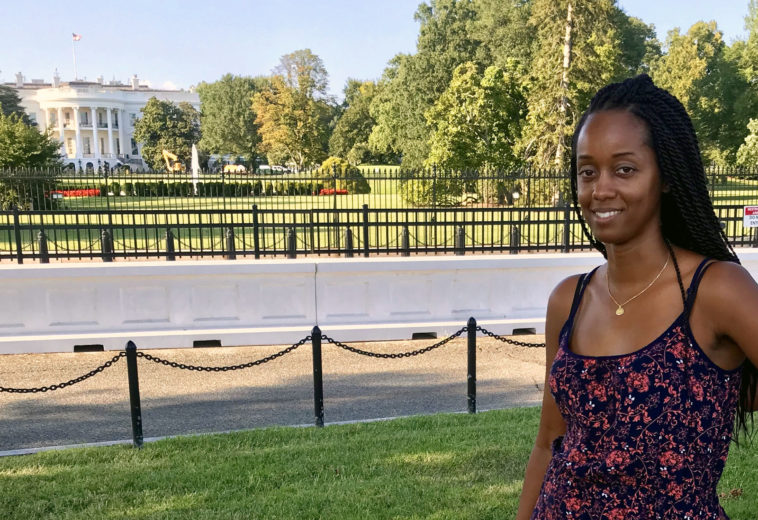 The recent deaths of George Floyd, Breonna Taylor, and Ahmed Arbery among many others, and the global protests that followed across the world have left me perplexed, angry and scared. In this current climate of insecurity, the news coverage concerning racial segregation, police brutality, and the wealth gap between whites and people of color has also intensified. As a black woman and immigrant currently residing in the United States, I am now asking myself, what does it mean to be a black immigrant in the USA today?

I was born and grew up in a small town of 35,000 people in the French Alps. My parents emigrated from Cape Verde, a group of islands on the West Coast of Africa, before I was born. As a black family of immigrants in a small town of mostly white French people, we suffered our fair share of prejudice and discrimination. As a child, I faced racist comments, but it was never violent or something that made me fear for my safety.

As a black family of immigrants in a small town of mostly white French people, we had our fair share of prejudice and discrimination.

In my sophomore year of high school, the school’s curriculum required us to improve our English by taking a trip to an English speaking country. It was my dream to visit the USA, so I arranged a summer vacation in Boston. My first trip was memorable, and changed my view of people of colors in the workforce. It was eye-opening to see black doctors, lawyers, business owners, etc. In France, it was not very common to see colored people in such careers. Most of the black and brown people I knew held janitorial or service jobs. When I saw all the opportunities in the USA, I decided that I wanted to build my life here. Thus, at the age of 23, I applied for my visa and immigrated to the US.

Adapting to Life in the USA

Over the years,  I became accustomed to the American culture and practices, but I found myself in a strange place. I am a black woman, but I’m not black American. I noticed that when people first looked at me, they automatically assumed that I was African American, but when I started to talk, people would quickly realize that I had an accent and their behavior would change. As I deepened my knowledge of African American history, I empathized with black Americans, but I didn’t necessarily identify with them or the challenges they faced in their daily lives.

For one, my ancestors weren’t brought here on a slave ship, I chose to live here. Secondly, except for movies or TV shows, the African American culture was foreign to me. When I went to the ‘hood’ with my black American friends, I barely understood Ebonics, and felt like a fish out of water. Third, my accent made me stand out. I felt that people treated me differently than my black peers. For example, in college, some of my classmates would often joke that they ‘didn’t see me as black’. Until today, this statement really bothers me. I am African, so I couldn’t be any more black… As I was faced with these types of remarks throughout my life and career here, I started to wonder, what does it mean to be black in America?

Are all Blacks Equal?

Seeing the death of George Floyd made me feel very concerned about the safety of black and brown people in this country while in police custody. As a human being, I felt that it was my duty to go out and peacefully protest. While attending a protest in Los Angeles, a white couple asked to stand in front of me. I responded, yes, even though I was confused since there was a lot of space around me. They proceeded, and the young lady turned around and said, “We want to protect you in case the police start to shoot.” I didn’t know what to respond. I felt a mix of emotions between gratitude that they would put themselves in a potentially dangerous situation for me, and also confused that they felt that it was their duty to protect me.

I pondered about the incident for days, and suddenly realized that I had never felt so ‘black’ in the USA. This couple didn’t know me. They didn’t know my story. They didn’t hear me speak. All they saw was a black woman who could be a police target. For the first time, I realized something important… For the past 13 years, I have been using my background and accent as a protection shield to let white people know that I am not African American, in order to make them more comfortable around me. I started to think about all the advantages my accent has given me since I landed in the US. I had always thought, if I’m able to immigrate to this country, and make something of myself, so can anyone. I now realize that the issue is not that simple.

I’ve spent my adult life in the US, but until now, I had never truly understood the deep racial and ethnic inequities that exist due to systemic racism. Difficulties to secure quality education, jobs, housing, healthcare, redlining, single parent households, and unequal treatment in the criminal justice system currently affects the future of many people of color in the USA. I am black, and even though my parents didn’t have a lot of financial means, I still  had an upbringing that prepared me for a successful life. I grew up in a two parent household. I went to a private catholic school. I didn’t grow up around drugs or violence. My parents supported me and paid for my undergraduate degree. Though I grew up in a different country, my upbringing gave me certain life advantages, and better chances to access upward mobility and professional success.

According to Monica Anderson, since 2000, the number of black immigrants in the US has risen 71%, roughly one-in-ten blacks (9%) living in the US are foreign born, up from 3% in 1980. The same study also states that black immigrants from Africa are more likely than black Americans overall to have a college degree or higher. Although I have had notable demographic, economic and geographic differences from black Americans, I am a black woman and the road to success is long and tumultuous. As a foreign-born citizen, I’ve worked hard to establish myself, and I’ve refused to let my color determine my path.

Where do We go from Here? Fighting for Equality

According to the 2015 study, “On Views of Race and Inequality, Blacks and Whites Are Worlds Apart,” black families with a head of household with a college degree have less than 70 percent of the wealth of households headed by a white person who did not graduate from college.

My fears are the same fears shared by most people of color in the USA. Regardless of my country of origin, I am a black woman currently living in the USA, and the fight for equality is also mine.

I am a black woman, and regardless of my country of origin the fight for equality is also mine.

Like the early European settlers and those who came after them, I immigrated here for better opportunities. I wanted the chance to build my American dream. I want to believe that I have the means to accomplish my dreams, and I want you to know that I am much more than my color. I am like thousands of black, brown, yellow, white immigrants and citizens in this country, I want to contribute to this melting pot we call: America.

2 thoughts on “I am a Black Immigrant in the USA”

This site uses Akismet to reduce spam. Learn how your comment data is processed.

Leave me a feedback!